This month I finally had the opportunity to go on a road trip in France, by bicycle. The trip was about 665 km, from Paris to Bordeaux. Here is an overview of the stops, from Google maps: 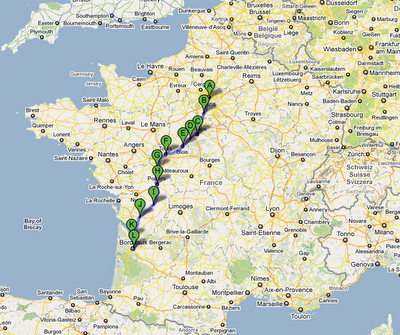 The initial goal was to do about 60km per day, over 10 days. In the end, it took 12 days. The list of stops:
A: Paris
B: Etampes
C: Orléans
D: Beaugency
E: Blois
F: Tours
G: Richelieu
H: Poitiers
I: Ruffec
J: Cognac
K: Blaye
L: Bordeaux
I had not done any training or preparation for this trip, and I lead a pretty sedentary lifestyle. This means that if I can do it, anybody can :) All that is required is motivation! (Ok and a few more things I'll get into.)

Photos
Click here for the photo album.
Below are my actual tracks, seen in Google Earth, with the data extracted from my GPS.
Zoomed out to see how the path fits in with the whole area of France (click for larger picture): 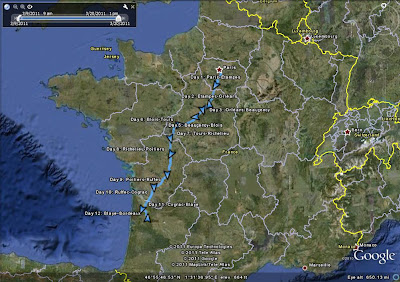 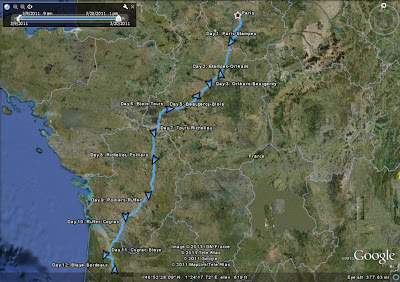 Here is a video simulation of the trip:


Getting into shape
The most difficult leg of the trip was from (B) Etampes to (C) Orléans, about 60km. This was only day two of the trip, and most of the trip was through wide open fields. While this makes for beautiful scenery, it was also quite windy. The wind, coupled with my not being in the best shape, led me to overexert myself, greatly straining my knees in the process. I had initially planned to bike the following day another 60km to (E) Blois, but I could barely get myself to mostly walk 32km to (D) Beaugency. :) I ended up staying an extra day in Beaugency, most of it spent in bed recovering :) After this rest day, I think I was in better shape than before the trip started!
Rain
I did have a drizzle on a couple of days. Even with a slight drizzle, being out in it long enough can get you soaked :) Fortunately I had a rain poncho which kept my backpack and its contents completely dry. I only had to deal with uncomfortable wet legs for a few hours. The most challenging weather I had was from Ruffec to Cognac, where for most of the trip, there was a constant drizzle, wind (though not as bad as on the road to Orléans), which when added to the hills, made for a relatively difficult trip. I was very glad to find a heater in the hotel room at Cognac that afternoon :)
Supplies
The bike:
My bike is almost a bottom-of-the-line mountain bike. I purchased it in 2006 for about 120 €. I believe it was the second cheapest bicycle at Carrefour. This shows that you don't need a top-of-the-line bike to do a long road trip, though I'm sure a higher quality bicycle could make life easier. :)
My backpack:
I carried all my supplies in a regular sized backpack. Here is the list of all my supplies, either inside my backpack or on my person:

Bike tools:
Gadgets:
Food:
Toiletries:
Other:
This was all I could fit in my backpack. If there was one more thing I wish I had brought, it would have been a comb! :) And maybe some moist napkins, to wipe my hands. At some point, the chain on my bike came off, and my hands became completely black in the process of putting it back on. I had nothing to clean my hands with, and resorted to using leaves, which didn't work so well... :) I believe the people at the hotel that night thought I was a homeless bum, because of my dirty appearance :)


Things I bought along the way:

Lodging
I spent every night in a hotel. I simply did not have room to carry a tent to go camping, and, quite frankly, the nice warm shower in a hotel after a day of biking was always very welcome :)


Technology
While, in theory, this trip could probably be done strictly with paper maps and no technology like a GPS or smart phone, using these technologies allowed me to focus on the riding and to enjoy the trip.

GPS:
While I didn't always follow the GPS directions exactly, it was still extremely useful to see where I was. Often the fold-out map would indicate a route as D42 (route départmentale number 42), but the actual street would either not be labeled at all, or be labelled something like “Rue de Jacques Chirac”. Try navigating that with only paper maps. :P Also, as I avoided taking the high-traffic streets, my paths were often comprised of many different small streets, mixed with some medium-traffic routes, often traveling from small town to small town. Navigating from one major city to the next, without a GPS, would require writing down or memorizing a list of 15-20 different routes and small towns to travel through (not to mention, if you DO happen to get lost, having to stop and pull out the big fold-out map to figure out where you are...). Vive la technologie !
Plus, tracking my position with the GPS allows me to show some nifty stats (below) and simulations in Google Earth :)

Smart phone:
I had an iPhone during this trip, but any phone with internet access and a few apps would have worked just as well. The apps I used were:


Daily Routine
I more or less followed this routine each day, with some variations:
Some nights I would go to sleep as early as 8pm. I must say I did a lot of sleeping during this vacation – I suppose to make up for the extra physical activity. :) I rode from about 6 to 9 hours a day.
Cost
Doing a bike road trip can only be a truly low-cost vacation if you go camping. In my case, I indulged in the luxury of staying in hotels every night (though I usually picked the cheapest ones). Here is a breakdown of the cost of this trip:

Food: Negligible. In fact, I probably saved money during this trip by eating mostly from grocery stores, instead of out in restaurants. :)

Why??
So why on earth would I want to go from Paris to Bordeaux by bike, over 12 days, when it is a 3 hour trip by high speed train? Here are a few reasons:

Stats
Here are some statistics I've extracted from my GPS. This includes the total traveling time each day from departure until arrival, including stops and breaks. The average speed would be slightly higher if I did not include my lunch break.   These speeds look pretty low to me, so people who are even moderate hobbyist cyclists should have no problem doing this trip :)


My average speed throughout the trip seemed to correlate a bit to my state of fitness :) 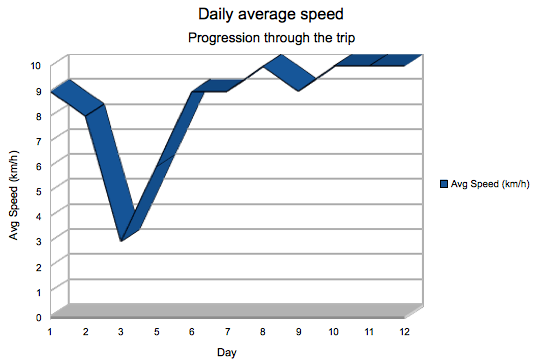