I love geography quizzes, and maps.  I'm pretty sure geography wasn't among my favorite subjects in school, but for some reason, I can spend hours just navigating around in Google Earth or playing quizzes online, trying to beat my personal best time trying to locate the 50 states of the US, the countries of the world, state capitals, etc.   I guess I'm low maintenance and easy to entertain.

A few years ago, I developed a geography game for Android devices, GeoFun, in which the user must find as many cities as possible within 90 seconds.  The goal is to tap as closely as possible to the given city, striving for both accuracy and speed.  At the time, I don't think there were other geography games on Android which worked this way, although today there are probably several.   In this type of game, it is often difficult to get 100% accuracy as a city only occupies one pixel on the screen.   If your finger doesn't cover this pixel, then the distance for this guess is non-zero.


After comments from users that it was too "difficult" to guess cities, I made the game a bit easier, even though 100% accuracy was never the goal: wherever you tap on the screen, I add a buffer circle of about 1cm diameter (the size of your fat finger touching the screen).  If the city happens to be anywhere inside this circle, the distance is zero.   After this modification, some users still seemed disappointed when they did not guess 100% accurately.  Not finding any new ways to try to make the game easier for users while keeping the basic principle of the game the same (if the game asks you to select Paris and you tap near Madrid, what can I do anyway?), I developed a new tongue-in-cheek "game" called You're a Winner! which tells the user how awesome they are every time they press a big red button.  If you tap on Madrid when trying to locate Paris, and you still want a high score, You're a Winner! is probably a better game for you.  So now I recommend You're a Winner! to GeoFun users who say that this geography game is "too hard".

Other geography games allow 100% accuracy (and therefore happier users as their egos are more easily placated) by focusing on locating regions (states or countries) instead of cities, or guessing the capitals of states or countries.  One of these games is for the French departments, made by Nicolas Cornette.

This app allows you to quiz yourself on on the 101 departments in France:

I figured I should learn the French departments since:
I thought I'd do an experiment and record my score for each test, as well as how long it took to complete the test, and see what my learning curve looks like.   Oh yeah, I also really like charts and graphs.  Again, I'm a low maintenance person.

I started out with the "find the department on the map" quiz.  In this quiz, you are given the name of a department, and you have to tap on its location on the map.  You have three attempts for each department.  You basically get 3 points for getting it right on the first guess, 2 points for getting on the second guess, and 1 point for getting on the third guess.   The total number of possible points is 303 for the 101 departments.  The score you see at the end is the percent of your points divided by 303.

The first attempt I recorded had a shameful score of 42%, and it took me almost a half hour to complete the quiz.   17 more tests and three hours later, I finally reached a score of 100%!  And the last test took less than 7 minutes. 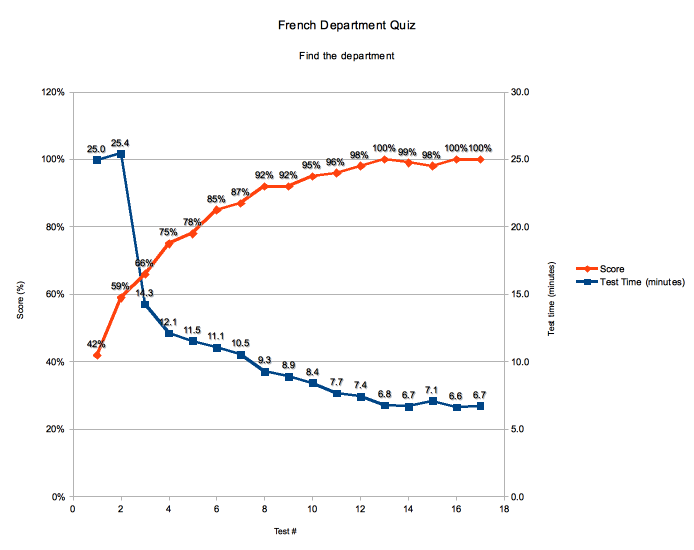 The score line is almost a straight line if we plot it on a logarithmic scale: 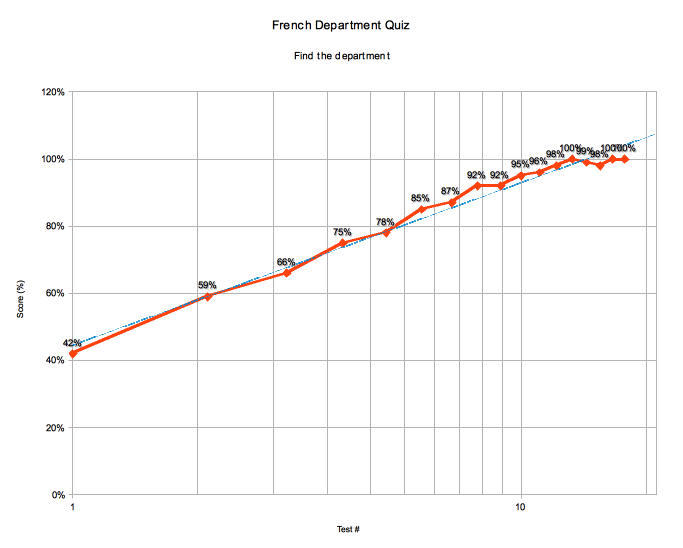 The first few tests take the longest, but they are the tests where the most is learned.  It took me about two hours of quizzing before I was able to improve a whole 50% (from 42% to 92%).  That's two hours of studying to improve from an F to an A, on the American grading system.  Then one more hour to perfect this to 100%.  I think the lesson we can take away from this is that perhaps when I was in school, I still could have gotten A's with 33% less studying.   That's 33% more time I could have had for biking, playing music, and wishing the internet existed already so I could be playing geography quizzes and blogging with charts of my progress.

I also like animated gifs.  So, here's one showing the progress of the "find the department" quiz:

This is a sequence of the "Game Over" screen at the end of each of the tests.  The departments in green are the ones I guessed on the first attempt.  The red ones are the ones I failed to guess after three attempts.  And the in-between colors are for departments I guessed correctly after one to three attempts.   My apologies to the daltonians out there.  Maybe you don't even see an animated gif :)

The next quiz I attacked was the "name the capital quiz".  In this quiz, you are given the name of a department, and you have to provide the name of its capital.  You can either type the capital name or choose it from the list of 101 capitals.   Again, you have three attempts for each department.

The result of the first test was interesting:

Why this green band running from the north to the south, surrounded by red almost everywhere else, except the southeast?  The green zones are the areas I passed through on my cycling trips across France.  I've also visited some cities in the south of France.  Most of the major cities I've visited happen to the be the capitals of their departments.

Instead of doing an intensive cramming session over a few hours, I played this game once or twice per day over a week.   For some reason, there were a few departments that I consistently failed to guess nearly every time.  I eventually took some time to review these capitals on the map (the app provides a search function which is handy for this) before continuing testing using the quiz.  So the learning curve for the capitals is not completely based on the capitals quiz alone. 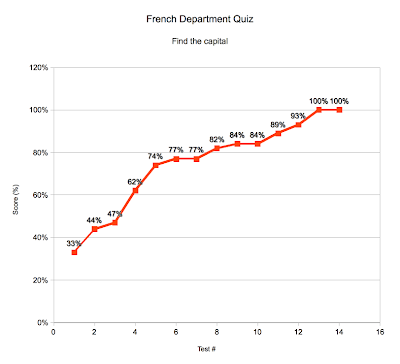 This curve is not logarithmic at all. Why? Maybe because I didn't cram, or maybe because I took some time to review the map between quizzes.

And the animation sequence of each Game Over screen:

I plan to learn the numbers of the departments next.  I have a feeling this will be more difficult than learning the location of the departments or their capitals.  Too bad this proposal from the French revolution wasn't accepted: