Today we recruited a couple of friends from Clisson to join us in the last leg of our bike tour, a 30km ride from Clisson to Nantes. It was nice to be cycling in a small group for a change.

We saw a flying saucer on the road, at La Haie-Fouassière. Technically, though, it was a parked saucer, not a flying saucer. The driver of this saucer looks like an Earthling astronaut though, and he is holding a cookie typical of the region. Several interpretations are possible, one of which is "this is your tax euros at work".

Nantes is in the Loire-Atlantique department, in the Pays de la Loire region, but there are references to Bretagne (the neighboring region) everywhere: souvenirs, restaurants, building and tramway stop names, signs in Breton... After the ten minutes I've just spent trying to inform myself on this matter, I can say that the separation (or possible future reunification rather) of Loire-Atlantique from Bretagne has been a subject of debate for decades. In 1956, Loire-Atlantique was separated administratively from Bretagne, even though historically they were associated for hundreds of years. In recent months, the French government has been "redesigning" the organization of the regions in France. Apparently the people in Bretagne and Loire-Atlantique were mostly in favor of reunification, but it looks like it won't happen after all. To understand why is left as an exercise for the reader.

For dinner, we wandered about the streets of Nantes, hesitating between all the choices of restaurants. Finally we saw a sign that said "No bullshit, just burgers." If this restaurant is targeting American tourists  they are doing a good job, because that is where we ate.

Below is a photo I forgot to include from the castle in Yseron: an extremely friendly and adorable dog greeted us and couldn't get enough of our affection.

Tomorrow we'll bid farewell to the Loire and say hello again to the Seine. 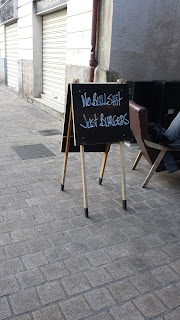 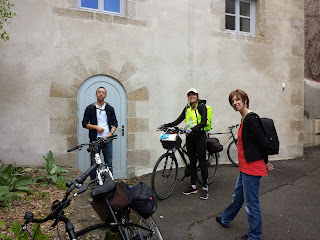 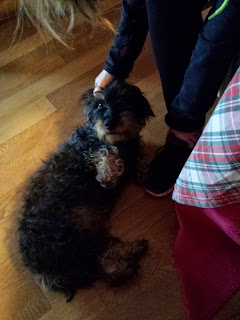 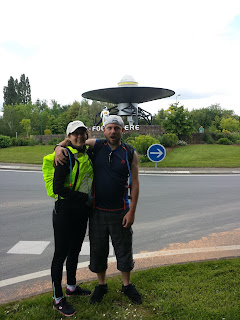 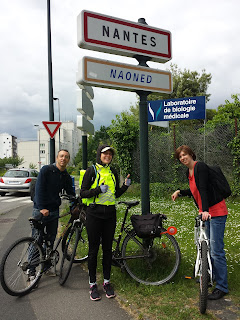 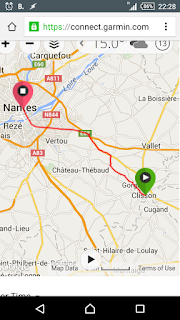 Today we only cycled 14 km from Yseron to Clisson. This is the path: https://connect.garmin.com/modern/activity/774541246

Before heading out on the road, we had a little chat with the owner of the castle we stayed at. He detected a "slight accent" and asked where we were from. I'm used to hearing this, but this time he said that Benoit also had an accent. I guess he's been hanging around me too long :-) The castle owner mentioned that he used to work in California, on the high speed train project. Maybe one day it will become a reality :-)

We expected heavy rains, but fortunately only had a few drops. We spent the day visiting with some friends: playing board games and geocaching.  We found 10 geocaches today, which is the most we've ever found in one day. Geocaching is definitely easier with a  four person team than with just two people. 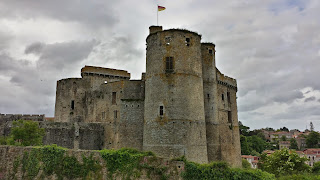 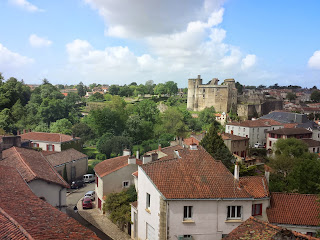 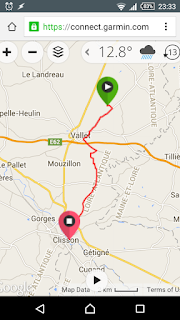 Today we probably cycled the least out of all the days on this tour so far, but it was the most tiring day. We said goodbye to the Loire river (for now) and headed south. We stopped to visit a zoo at La Boissière du Doré, where we spent the whole afternoon. Then we cycled over to Yseron, near Vallet, where we are spending the night in a castle. The roads were hilly, and there was a bit of traffic, but the weather was perfect. The path we took is here: https://connect.garmin.com/modern/activity/773588675

For dinner, we walked about 4 or 5 km to a pizzeria in Vallet, the closest city with restaurants. We found two geocaches on the route to the restaurant.

Tomorrow should be a nice and easy day: less than 15 km of riding planned,though the weather calls for rain! 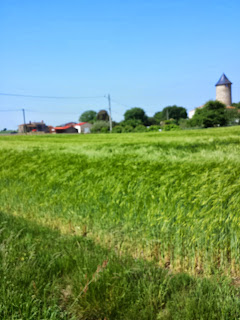 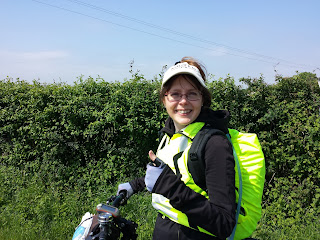 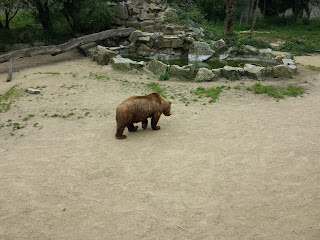 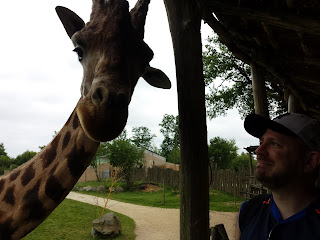 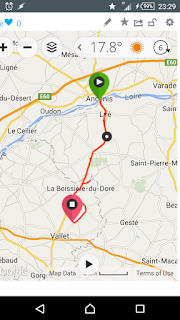 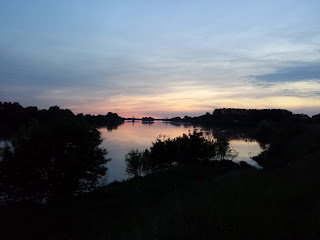 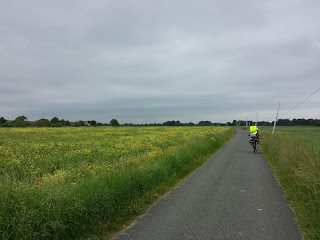 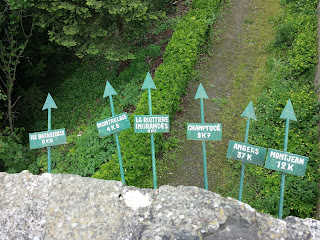 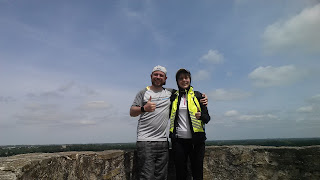 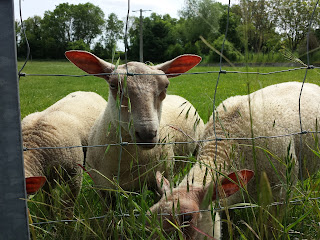 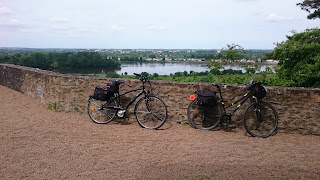 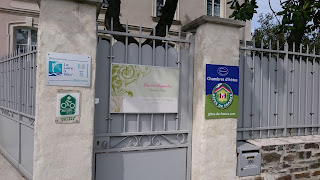 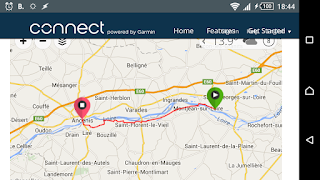 Once again faced with an obligation to take some days off (vive la France), I decided to take a small tour of part of the Loire river. This time, I'm not alone! Benoit decided to join me.  The tour is from Angers to Nantes, mostly following the Loire river, but with a deviation to Clisson, where we will visit some friends.
Sunday morning we took our bikes and ourselves to Angers, by train. It wasn't a cycling day though: we spent the day visiting the city of Angers, mostly the castle. The weather was beautiful - even on the hot side.

Today, we cycled from Angers to Saint Germain des Prés, just over 30km. This is a popular route for cyclists, and there are signs indicating the cycle route, the whole way.

Part of the road was a bit rough, the road covered by small rocks. A mountain bike wouldn't have any problem. However, our bikes are hybrids (vtc in French) - with tire thickness between mountain bike and racing bike tire widths. We made it through those parts of the route without getting any flats, but I'm not sure a road bike would handle the terrain well.

My bike has, for each brake, a tiny screw near the brake barrel adjuster and the brake lever. As you screw it in, the brake lever closes. I guess the purpose is to have the brake levers closer to the handlebars to minimize the reach required by your fingers, to brake.  At some point, I'm guessing due to the vibrations on the rough road, this screw, on the rear brake side, managed to screw itself all the way in, thus leaving my brake lever practically completely closed and my rear brakes always on. The fix is of course simple : simply take the Allen key of the correct size and unscrew (or remove completely) this (useless) screw. Unfortunately, I didn't have the right size Allen key. I had two other keys, but not that one (thanks, Murphy). One of the two keys I had allowed me to find a workaround, though: I loosened the cable clamp bolt (near the brake pads), then loosened the cable which allowed me to separate the pads from the rim a tiny bit, and tightened the bolt again. It was good enough.

Just after this quick adjustment, we went to a park to have lunch. A couple of cyclists there had all the imaginable tools you might need, and they were kind enough to lend me the right Allen key so I could do the proper fix. They were on a Nantes - Angers - Nantes tour. I guess if you're ever going to need some help from fellow cyclists in France, the Loire route is one of the best places to be. We also met a Danish couple at the Angers hotel who were on tour. I don't know where they had been already, but they were heading to Paris.

This tour has gotten off to a good start: beautiful weather, nice roads (except for the little bumpy part), mostly flat route, no wind, almost no traffic at all, and beautiful scenery. 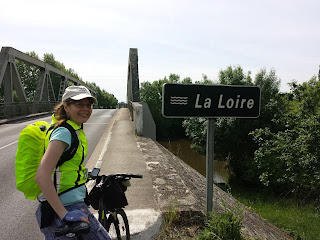 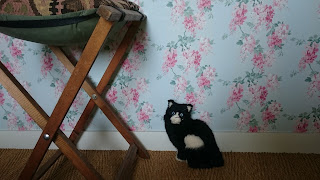 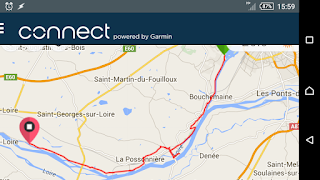 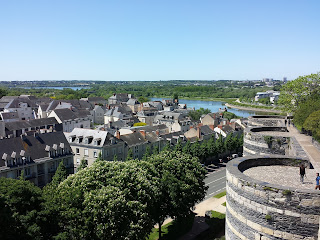 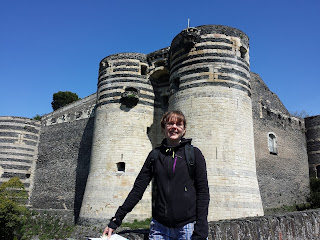