This Saturday, we biked over to Parc de la Villette.  It seemed like the rest of Paris was also outside, taking advantage of the sun.  After taking a nap on the grass, we continued biking along the Canal de l'Ourcq for a bit, before turning back.   We stopped for dinner at Belushi's, where it seemed that the waiters preferred to speak English rather than French.  Not that I minded :)  The total trip was around 25 km.

The route to the park: 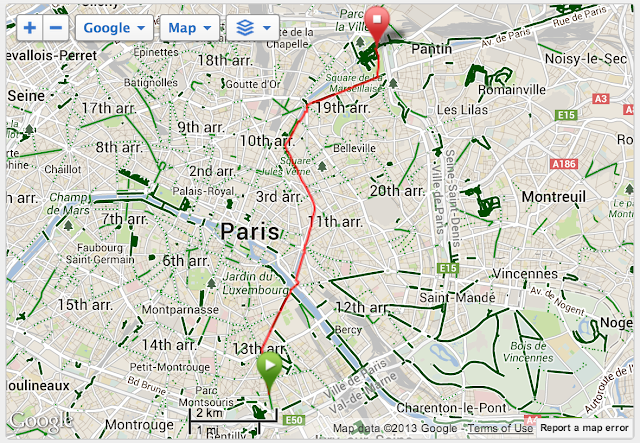 Priority to the right

The other day, as I was biking home from work, I was heading east on a rather large street (an avenue with traffic in both directions), and a motorcycle delivering sushi was waiting on a small one-way perpendicular side-street.  He was facing north, and wanted to turn right (east) onto the avenue.  He entered the avenue just as I approached the intersection. 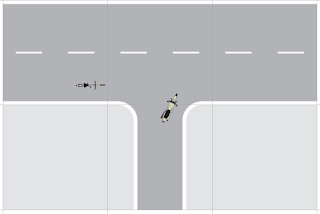 Seeing as he cut me off, I rang my bike bell (which is quite loud :)) several times.  Much to my surprise, he actually stopped to talk to me.  He told me that he had the right of way.  I couldn't believe that a vehicle entering a large avenue from a small one-way side street could possibly have priority over the traffic on the avenue, and I insisted upon this point.  The driver of the motorcycle simply just kept repeating one phrase: "priority to the right".  He also offered, in a rather condescending way, to buy me a book of traffic code in France...  My big mistake in this whole ordeal is forgetting that the traffic code in France (or anywhere, I suppose) is not always logical or even safe.  Indeed, since there was no other signage or markings on the ground at this intersection, the priority by default is given to the right, regardless of the size or "importance" of the two streets.  Sigh.  I hope I never see Mr. Sushi again, because I'm quite embarrassed now.  Fortunately, that is not the road I usually take to go home.  I did find some consolation by discovering that other people on forums complain about the priority-to-the-right not making sense or even being safe in some cases.

Posted by Carmen at 2:24 PM No comments:

Taking advantage of the unusually long streak of sunny days in Paris, we went on another bike trip today, this time from Paris to Versailles.  At Versailles, we met with a friend, Guillaume, who will be climbing the Alpe d'Huez next week, which is stage 18 in the Tour de France 2013.  This ascent has an average grade of 8% over 13 km.  My GoPro camera is very excited to be joining him on his journey.

As we biked to Versailles, we noticed that we were on part of the path of stage 21 of the Tour de France 2013 (the last day of the race).  About 3 km of this path on Pavé des Gardes was pretty tough for us, at about 4.3% average grade, if the elevation measurements from my Garmin are to be trusted.   Guillaume told us he hopes to be able to do the Alpe d'Huez in a bit over one hour.  Seeing how hard doing just 4% over 3 km was for us today, I think I'd consider it a personal accomplishment to just be able to finish the Alpe d'Huez without having to get off and walk my bike :)

On the way home, we saw a group of American (I assume, from the accent) bike tourists, with loads of gear on their bikes.  I wanted to ask them where they were from and where they were touring, but I didn't seize the moment :)

This is the route we took today.  You can see the details of this route and the return route, uploaded from my GPS.

Bike trip to Bois de Boulogne and other tourist traps

This weekend we took a bike trip to Bois de Boulogne, and also stopped by the Eiffel Tower, Champ de Mars, Invalides, dinner at HD Diner Opéra, and finally returned home.  The trip was a total of 32km. 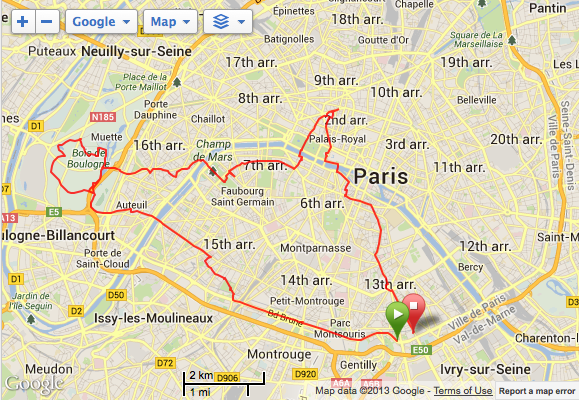 Here's a video from our outing: I mounted the camera to the handlebars of my bike and set it to take one picture every two seconds.  It ran out of battery just as we arrived at the Eiffel Tower.