A year since my first bike road trip from Paris to Bordeaux, I decided to embark on another adventure, this time to London.  I really lucked out with beautiful weather during the whole trip, which I'd say is unusual for this time of year in Paris and London.  I met a few challenges on this trip, but it was a pleasure again to be rolling out in the countryside.

Here is an overview of the main stops: 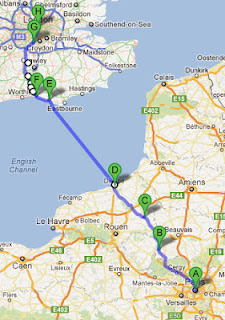 The trip by bike took just over four days; five days including the return trip by Eurostar.

Most of the gear I had with me on this trip was the same that I took on the Bordeaux trip.  In addition, I attached a bag to my handlebars for things I would need to access often while on the road: water, snacks, and sunscreen.

I had done no preparation whatsoever for the Bordeaux trip.  Since that trip, I have been cycling to work everyday.  The commute is 13km round trip.  This is not an extreme workout, but I assumed that it would be sufficient to better prepare me for the London trip.  My performance on the London trip ended up about the same as on the Bordeaux trip.  I guess proper training would involve cycling with heavy gear over longer distances.

Time for a new bike?

I'm still using the bottom-of-the-line mountain bike I had on the Bordeaux trip.  The following are the pros and cons of my current setup.  I'm considering getting a new bike, or at least making some changes to my current bike, to make the trips easier and be able to enjoy riding even more.

Pros:
- Cheap. If it is stolen, it's only a minor drama, not the end of the world.
- Sturdy tires.  I have not had a single flat tire in over 4000 km.  I occasionally (though rarely) have to travel on unpaved roads, so this is a major benefit.
- Suspension. Front and rear suspension makes traveling over most bumps almost unnoticeable.
- Heavy-duty bike lock.  After my first bike was stolen, I purchased a heavy lock at a motorcycle shop. This gives me peace of mind if I have to leave my bike alone in public for a while.

Cons:
- Cheap.  Since the bike was cheap, the material is probably heavier than what I would get with a more expensive bike.
- Sturdy tires.  I'm sure I could whiz by much more quickly if I had some ultra-thin tires and tubes inflated up to maximum pressure.
- Suspension.  I believe the full suspension may contribute to the heaviness.  Since I rarely travel on unpaved roads, I think I could live with only front or even no suspension, if it could make the bike much lighter.
- Heavy-duty bike lock.  This adds to the already significant weight.  In all the hotels I stayed at when touring, I could leave my bike in a secure place (either in a private parking or in the room itself).  So I'm sure on my next trip I'll carry a lighter lock.
- No panniers.  Most of the weight of my gear was carried on my back.   Even if I don't get a new bike, at a minimum I should install panniers to distribute the weight away from my body a bit.

France versus the UK - Challenges

Based on my experiences cycling from Paris to Bordeaux, Paris to Dieppe, and Newhaven to London, I can say that I feel much more at ease cycling in France than in the UK.  Of course the experience will vary depending on where in these two countries one decides to cycle, but on the routes I've travelled:

- Hills. The routes I travelled in France were generally much flatter than in the UK.   From Brighton to Sutton I saw one sign warning about a 15% grade, and another for a 16% grade.  These signs were on a route recommended by a Brit who described the route as "almost flat".  If this is "almost flat" for Brits, I'd like to see what "hilly" looks like!  I'm pretty much a novice to bike touring.  I haven't trained, and my goal is really to just be outside, not necessarily to push myself to test my physical limits (which seem to be pretty low :) ).  So, I think I'll plan my next trip for Belgium and/or the Netherlands... :)

- Traffic.  One of the craziest areas I've biked in, in France, is probably Place de la Concorde, in Paris. Here's a satellite view, where you can have an idea of the traffic there.  I can say that I've felt more comfortable cycling in Place de la Concorde than in many areas of the UK.  A few of what I thought would be remote roads in the countryside in the UK turned out to have many cars, going fast, with narrow lanes and not much visibility.   The epitome of this was Pebblehill road, which I describe later.  Fortunately, the majority of the trip in the UK was quiet.

- Roundabouts.  Although riding on the left side of the street didn't pose a problem most of the time on long distances on a single road, intersections and roundabouts were a bit trickier.  I navigated many roundabouts in the UK as a pedestrian, walking my bike across each section.  I have a feeling that I was probably a bit overcautious here, and that most cyclists would probably have no problem riding these roundabouts :)


Despite the challenges biking in the UK, once in the small country roads, the scenery was beautiful and the ride enjoyable.

Day 1: A sunny start in Paris

On day 1, the trip gets off to a good start in Paris.

The morning was a ride from Gisors to Forges-les-eaux which went much faster than I anticipated.  I arrived at Forges-les-eaux around noon, and decided to continue on to Dieppe, which I had initially planned for the following day.

A bike/pedestrian pathway runs from just outside of Forges-les-eaux to Dieppe.  Removed from traffic, running mostly through scenic farmland, this is the perfect route for bike touring, strolling, or roller blading.  I would like to come back at some point and just spend the day here, either on bike or roller skates.   Something to look forward to as warm weather approaches...

The ferry ride from Dieppe to Newhaven is about four hours. I took it on an early Sunday morning, and it was quite empty.  I had never ridden a ferry like this before, so this was a new experience. The only ferries I'd ridden previously were for short trips (about a half hour): at New York and at Bordeaux.  This ferry was huge, with plenty of places to sit, shop, or eat.    There were some seats which resembled seats on an airplane, except more comfortable with much more leg room.  This is the way to travel!

I was lucky to have magnificent weather as I came into Brighton.  I discovered the Undercliff walk, a welcome flat stroll for several kilometers along the beach leading to the pier.  I took it easy this day and mostly walked.


As I approached the pier, I discovered the Brighton Mile / Sport Relief.  I wasn't too sure what this was about, but I assumed it was some fund-raising/charity event, as I saw men, women, and children of all ages, shapes and fitness levels, running.  Some were dressed in costumes such as cheerleaders or rabbits.

Without a cloud in the sky, and with the warm temperatures, the sunbathers, street performers, and the pier, I almost thought I was in Santa Monica.

After a tough climb going up Dyke Road leaving Brighton, I was rewarded with this view:

On the route from Brighton to Sutton, I came across a street called Pebblehill road, about 15km from Sutton.  This is a very beautiful area, with trees lining the road, on a steep incline (16% grade) with no visibility around bends, little room for cars to pass cyclists, and no path for pedestrians.  Upon seeing this, I hesitated for a while, and when I didn't find any reasonable alternative paths, I decided to go for it.
Debating whether to go up Pebblehill road:

Just then, a resident of the area saw me and we chatted for a while.  He told me that he had been living there for 15 years, that there had been four cyclist deaths up this passage (I haven't been able to verify this), and that he refused to walk up this passage.  He recommended an alternative route, which went through private roads, on a very steep and narrow footpath, with two fences I had to lift my bike over.  I felt like I was on a reality TV show, my endurance and willingness to continue being tested. In the end, it took me an hour and forty-three minutes to navigate less than one kilometer.  But when I finished, I felt like a warrior who could accomplish anything!  Raaawwww!!

I made it!  It was a pleasure to see Big Ben and the London Eye as I cycled up to Lambeth bridge.

And to finish the trip, a nice meal of Guinness battered fish and chips, at a pub:

How could one of my blog posts be complete without at least some statistics and a chart?

The following table and chart show my performance progress (or regression :) ) as the trip went on.  I excluded the Pebblehill detour, because it was a statistical anomaly, not within the bounds of the typical values for speed and distance (i.e., it would bring down my stats too low and make me feel less proud of myself. :)) 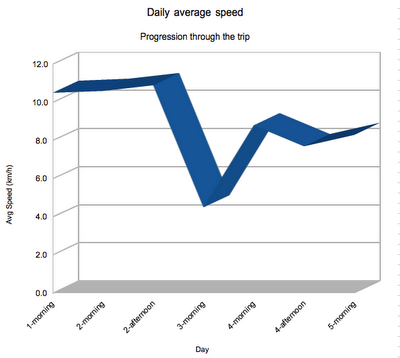 It will probably be a while before I can go on a long tour again, but I'm already thinking about possible tours to do next.  There are a couple of 3-day weekends coming up in April and May.  Based on my how I did during this trip, and assuming on a shorter trip I'll have a lighter load, I could plan for about a 200km trip one-way over 2.5 days, returning the afternoon on the third day by train.   On a regular 2-day weekend, I could plan for 100-125 km trip.  For a more relaxed trip, I might first take a train out of Paris and start the cycling in the suburbs or countryside.  Here are a few possibilities (not sure if the trains connecting Paris to these cities allow bikes):