My photographer didn't accompany me on yesterday's bike ride, so I couldn't easily be in the pictures.   I thought that taking pictures of solely roads and trees would be dull, so I invited my triceratops to come along with me and pose in the pictures.

Yesterday's bike ride was 87 km and followed two paths I had previously done partially, years ago, but on separate occasions:
This is the path I took: 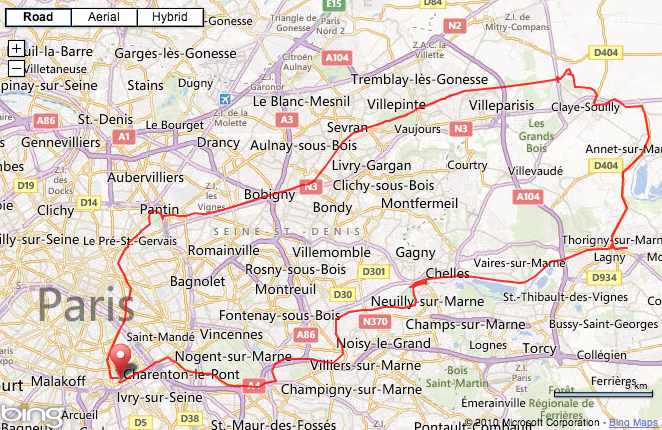 Roughly speaking, in this map, the Canal de l'Ourcq portion of the trip is the upper part of the loop, and the Marne river is the lower part.  Most of the trip was on paths alongside the canal and river, which made for pleasant riding.  I was quite motivated once I got out of Paris after about an hour of cycling, finally leaving behind the traffic and stoplights.  I went pretty fast (for me) along the Canal de l'Ourcq, maintaining a speed between 20-25 km/h.

But after getting slightly lost and finding myself riding on grassy fields on private property, I decided to cut over to the Marne river a few km earlier than planned, and head home.  As I headed back home on the second half of the loop, along the Marne river, I was starting to feel tired.  My speed probably dropped to around 10-15 km/h for that part of the trip.  Apparently my average moving speed for the whole trip was around 14 km/h.  This is a bit better than my average speed on my trip across France.   I guess it's not too surprising considering I had less gear on this time!  I had fewer clothes packed, no spare inner tube or bike pump, and of course nothing like soap, toothbrush, etc.  However, I did have twice as much water (1L) and a whole triceratops...

The whole trip was about 8 hours long, with about 2 hours for breaks.

My ride took me within about 5km from Disneyland.  I didn't bother stopping to visit.  My triceratops would kick Mickey's butt any day.

Here are a few photos from the trip.  More photos are in the gallery.

These and more photos are in the gallery.

The time/date and location captions on top of each picture were added by the app BoD made just for me: PicLabel.  He's just published it on the Play Store so other people using Android can also have fun with this simple but useful app :)
Posted by Carmen at 2:11 AM