I recently found myself required to take some days off.  With the Ascension holiday in France on May 29, a company holiday on May 30, and three extra days I had to take off, I found myself with a full week off at the end of this month.   With the weekends before and after, I saw that that left me with nine days.

What else to do during nine days but another bike trip?

I figured I could ride about 300 km in seven days, plus two days for transportation.  After checking on which trains in France I could take my bike (without unassembling it),  I decided to do a trip in Brittany: from Brest to Mont Saint-Michel.  This region is not particularly known for its sunny skies, hence the title of my tour: the "Brittany Rain Tour 2014".

This weekend I did some preparation. I took my bike to the "bike doctor" around the corner.  The normal price for a checkup at this place is 32€.  I told the guy that I had done about 8000 km on the bike.  He looked at my bike and said there was not much work to be done, so it would probably be less.  In the end it was 28€.  He fixed the gears a bit so changing gears is smoother now, he replaced the rear break pads, and he actually cleaned my bike.  I was surprised he went to the trouble to clean it.  It was so filthy.   Just before leaving, I discovered the bike doctor had thought I was planning to do a bike trip of 8000 km.  He seemed disappointed to discover that I was just planning on riding 300 km, in Bretagne.

I then went shopping for some supplies.  Today (Sunday) I realized that I didn't have any paper maps of the region.   Google maps and my Garmin GPS are great tools for navigation and calculating distances, but I've always found paper maps to be useful as well: for their "high resolution" detail, as well as seeing which streets are major highways versus small departmental roads.

In France, most businesses are closed on Sundays, with some exceptions including grocery stores, restaurants, and stores in tourist areas.  So, I went to the Fnac store at the Champs Elysées, which sells some books, in the hopes of finding some road maps.  Unfortunately they didn't have any maps there, so I had to go farther, to La Défense, to the Quatre Temps mall.  I found what I was looking for there, in the Cultura store.

It was a beautiful day today, so I stopped to take a few pictures at La Défense.  This brought back some memories, as I used to work there a few years ago.   I think I generally prefer these "modern shiny" buildings rather than the architecture with more "historical value" that you see around most of Europe.  So sue me.


When I got home, I gathered my supplies to snap a photo to share with you, and to make sure I had everything on my list for my trip next week. 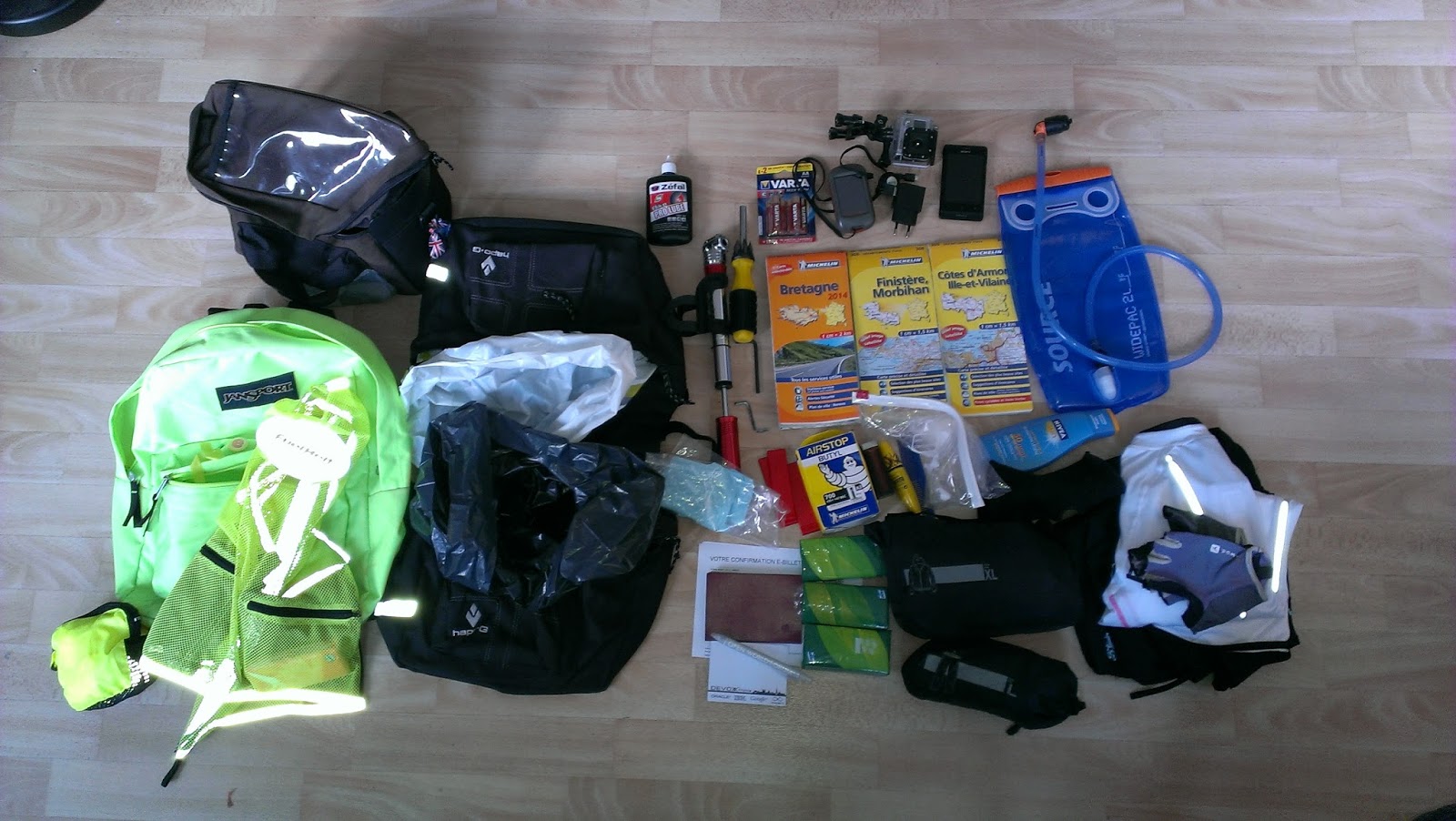 
So these are most of my supplies.  I've left a couple of things out.  Surprisingly, most of all of this fits just into the panniers.  It seems lighter than the supplies I've taken on previous trips: probably because the weather is warmer this year, requiring fewer clothes.


Tune in to hear about the trip when it starts!